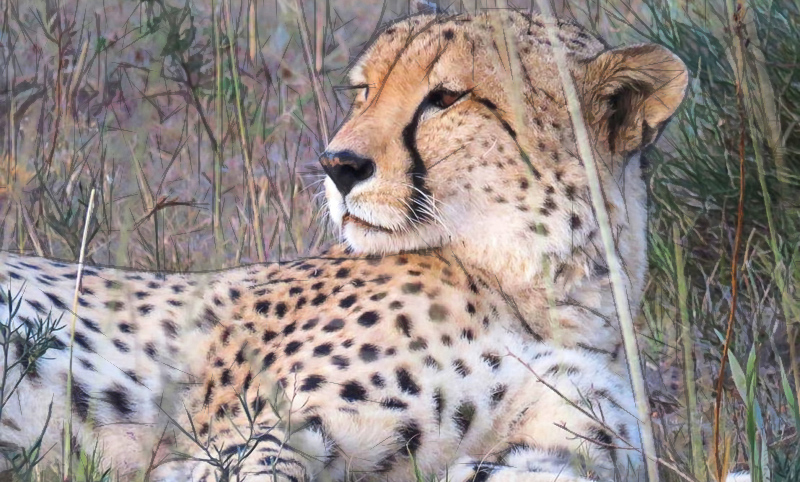 We were rattling up to the Rooiplaat plateau in Mountain Zebra National Park, hugging the northern fence line — territory that visitors never venture into as the rough, bouncy tracks are limited to park rangers. With us in the open safari vehicle was our guide, Sinethemba … “We Have Hope”. How blessed were we to be in the company of someone with such a beautiful name, replete with such promise. We were going cheetah tracking!
Grinding and swaying, the jeep nosed steeply down to the plains. Ahead was an astonishing sight: three great grey lumbering shadows with sharp up-curved horns gliding across the golden-grass flats. Black rhino! We sat there speechless, disbelieving. In reverent silence we trained our binoculars on their measured meander till they disappeared into a tree belt. The privilege of witnessing them, so close in our sights, did not elude us.
By now Sinethemba was raising his telemetry aerial out the side of the jeep. Periodically he’d pull up the handbrake, clamber out, and stand on an anthill, aerial held high while we sat listening to the crackled hissing. His first few tries elicited nothing but crackle. Then, while the vehicle was still slowly descending the high plateau, his outstretched arm earned him a tinny blip-blip-blip. A ritual that repeated itself all the way into the broad grass swathes of a valley run through by the dark wiggly line of a riverbelt. We drove and stopped; drove and stopped, aerial twisting this way and that as the blip-blips, reticent, stubbornly withheld their secrets.
Sinethemba was muttering that the surrounding rocky hills often bounced back the signal, giving rise to a confusion of mixed messages. It was time to park the vehicle and head out on foot towards the riverbelt. Out we tumbled, walking wordless in single file, guide out front with his rifle. We walked and we walked. Hiss, crackle, blip-blip. “I think the cheetah is staying on the move, constantly evading us,” said Sinethemba.
He had a new plan: drive back over the dry riverbed and approach the treebelt from the opposite side. We jerked and swayed, crested a ridge, stopped. Assuring us we’d be perfectly safe on our high perch, Sinethemba strode off over the hill with his rifle, aerial bobbing above him, to find cheetah. Silent and contemplative, our group waited. After a while, a khaki-clad figure appeared on the horizon, arms gesticulating that we join him. Singly we filed up the hill and our wavy human line struck out across the grasses. Eventually Sinethemba stopped and gestured. Some 50 metres away was a small thorny tree. Below was a shadow in the yellow grass. Male cheetah. 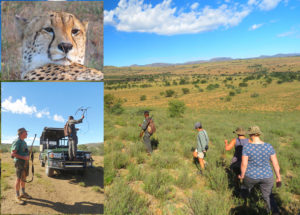 All the cat had to do was flop down flat and you would never know he was there. Kudos to Sinethemba for his ability to decipher a warm-blooded creature from a shadow. The cheetah appeared perfectly chilled, raising his head now and again to stare languidly in our direction. At 20 metres, Sinethemba stopped and motioned to us to quietly and slowly approach. An anthill acted as a plinth to get a better view of the male. It was so immensely thrilling: the chase, our first glimpse, standing in his territory, the pure wildness of it all. The two-and-a-half hours of pursuit had simply dissolved away.
Want to try it out?

Caracal in our midst 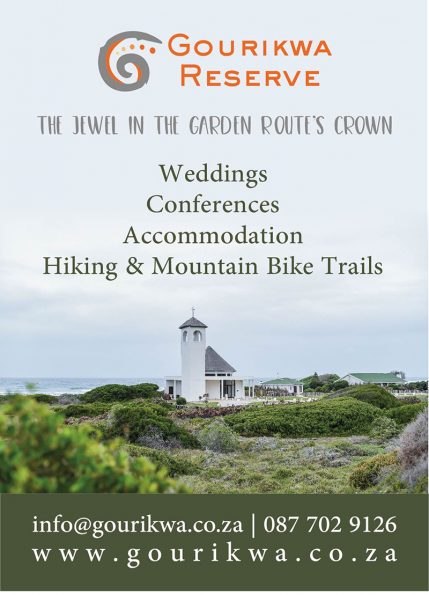